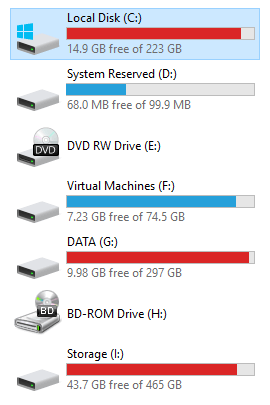 Running out of space on your primary disk, such as the SSD you purchased that you figured would be just large enough to get by? Don't archive that Microsoft Outlook data!  Well, not yet, at the very least.

Sure, archiving may speed up access to old data in some cases, but it is 2015 and local I/O performance has become less of an issue for mainstream users as overall system speed increases across the board (no pun intended; I'm looking at you, hardware aficionados.  *sigh* Yes... I'm one of you.). You can move your Outlook .PST files to a secondary disk, such as that mechanical HDD you keep mounted for the sole purpose of storing your super-awesome collection of videos of cats in top-hats. You know that disk can serve a higher purpose and it deserves that distinction.

What's that you say?  Moving your .PST file means Outlook potentially "forgets" about some details stored in the .PST file, such as the contacts you compose emails to every day? It sure does.  And that sure was an eye-opener to me in the past, too.

My PC's boot and operating system partition run on a RAID-0, two drive SSD array.  While super-fast, keeping the overall system speed and boot time ultra-efficient, it was starting to get dangerously close to running out of disk space.  Instead of combing through the installed applications looking for something to uninstall, I decided to go with a different approach. This PC also contains a couple (okay, three!) mechanical drives. One of those drives had plenty of free space at the time I was facing this predicament with Outlook, so I decided to move the largest of my .PST files over to it.

For some background, NTFS file systems support symbolic links that act like real files (or entire directories) located in the directory the symbolic link resides in, but in fact, points at a different location (on either the same disk or another disk altogether).  The digestible version is: you just tricked your operating system into thinking a file or directory is in its original location when it actually resides somewhere else. Magic! Okay, not magic. Science!

I fired up Outlook 2013 and voila! Instant gratification.  Outlook thinks my .PST file never moved and I regained some much-needed disk space on my boot drive.

This is an example list of shell commands needed to create the symbolic link within a Windows command prompt session.  To start an elevated command prompt in Windows, press

-X on a Windows keyboard and select "Command Prompt (Admin)".  Next, key in the following commands, line by line, followed by the Enter (or Return) key after each command.  The line numbers are there to indicate the start of each command.

If you have any questions regarding the commands above, ask me in the comments section below. Feel free to share your own disk space management tips, too!

Keep an eye out for my next blog post on how symbolic links and cloud-based storage solutions (such as DropBox) can provide you with a simple way to share application data between systems for applications that don't yet support cloud storage.