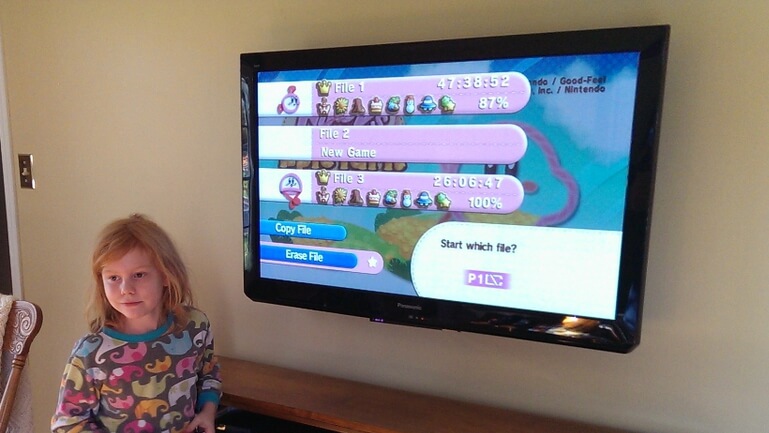 On a recent Sunday morning my daughter Kylie called out from the living room "Daddy, I've done it!  I got 100%!  I'm finally done!  I've got everything!"

When I was her age, game developers often made games excruciatingly difficult to "beat" and "completing" a game meant defeating the final boss, try after agonizing try.  The worst games rarely gave enough lives/continues to make it to the end, let alone beat it... so completing a game felt like an accomplishment.

In today's games, I find myself getting resentful of the constant reward systems, auto-regenerating health systems, never die systems, auto-save systems and all of the other bells and whistles that make todays games far easier to "complete" by my old standards.

What I never realized was that for the next generation, the generation that hasn't any notion of "the good old days," they experience harder challenges than I ever faced - if they truly want to "complete" something.

The game file at the top of the images shows my joint effort with Kylie - 47 or so hours to defeat the final boss with some time spent along the way replaying our favorite levels.  We completed 87% of the game's total content and subsequent rewards.  By my old school standards, we had done everything required.  It was time to move on.  The game was done - and it was too easy.

To Kylie's new school standards though, she wasn't done.  She wasn't happy with 87%, she needed 100%.  She was a new age "Completionist".  She started a new game file, and went on a 26 hour quest to find everything herself.

It was when she was explaining her accomplishments to her mom that I realized how much more difficult that type of endeavor was.  (This is especially true when you factor in that Kylie isn't allowed on the Internet for anything... and doesn't have the first clue about walkthroughs)  I always knew what needed to be done to "complete" a game - hammer away to get to the final boss - defeat the final boss - watch the cut scene.  She had know idea what things were still "hidden" or how to collect them all.  She had to factor out every possible combination to make sure that every possible outcome was covered.  That's 26 hours of "what about here", "what about this", "what does this do now".

I'm not sure if "Mom" will ever really know that feeling of "completing" a video game, but I finally know what that feeling looks like through the eyes of a 7 year old with new school games.  I promise I won't complain about how new games are "too easy" on players.  I'm off to play cow clicker.