Ryan's iPhone 5S Review - It's All About Performance 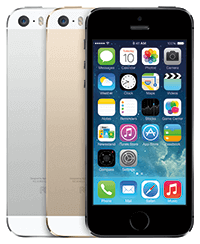 I'm definitely late to the party with this review, but I feel compelled to gush about this phone.  Let me first start by providing you, the reader, a picture of where I was personally sitting in the mobile space before this upgrade.  Up until very recently, I was using an iPhone 4 as my primary mobile device.

The iPhone 4 was more than capable in getting me through my daily, digital life.  Then, iOS 7 happened.  Anyone running an iPhone 4 knows what I'm referring to here.  Even with the recent iOS 7.1 update, iPhone 4 users have been left asking "Why?",  or more precisely, "Apple, why did you release this updated operating system for this phone if it performs so poorly?"

After several months of contending with the poor performance of iOS 7 on my iPhone 4 I had had enough.  I typically don't put up with these types of performance issues with devices I use on a daily basis, so I resorted to Jailbreaking my phone to eek out a little extra performance until I could secure an upgrade.  The fact that I'm an avid Facebook user means that I was also dealing with the absolutely horrible performance of the Facebook application.  I couldn't take it any more!

Early in March 2014, I upgraded my mobile phone to the iPhone 5S.  I was absolutely floored by the performance increase.  I've typically taken big leaps in phone upgrades in the past, but this leap was more than even I could have expected.  Using my phone now feels just as intuitive and quick as using my Core i7 desktop computer.  I can get things accomplished as I think about them, without having to wait for my device to "think" its way through the operations.  The iPhone 5S doesn't bat an eye at the latest Facebook application's slower-than-molasses code.  It tears through multimedia applications with razor sharp memory operations.  It chews up OpenGL gaming graphics for breakfast.  The iPhone 5S is FAST.

I'm sure a lot of Android users will point to their super phones, stand proud and state they have the fastest phones on the planet.  We all know the title for fastest mobile phone is usurped every few months as it is.  However, as it stands right now, the iPhone 5S more than makes up for the performance woes I was experiencing.  I find myself doing more with my phone than I ever did; and being a coder, I already did a lot with my phone that the average user wouldn't attempt.  It just makes sense to turn to my phone again for things I might have booted up my laptop or desktop to accomplish.

If you, too, are a fan of Apple hardware, and you're sitting on the fence about whether to get the 5S, then I suggest you do.  It's worth every penny.  If you already own an iPhone 5 or 5C, it might be worth waiting for the iPhone 6, but the 5S will still surprise you!